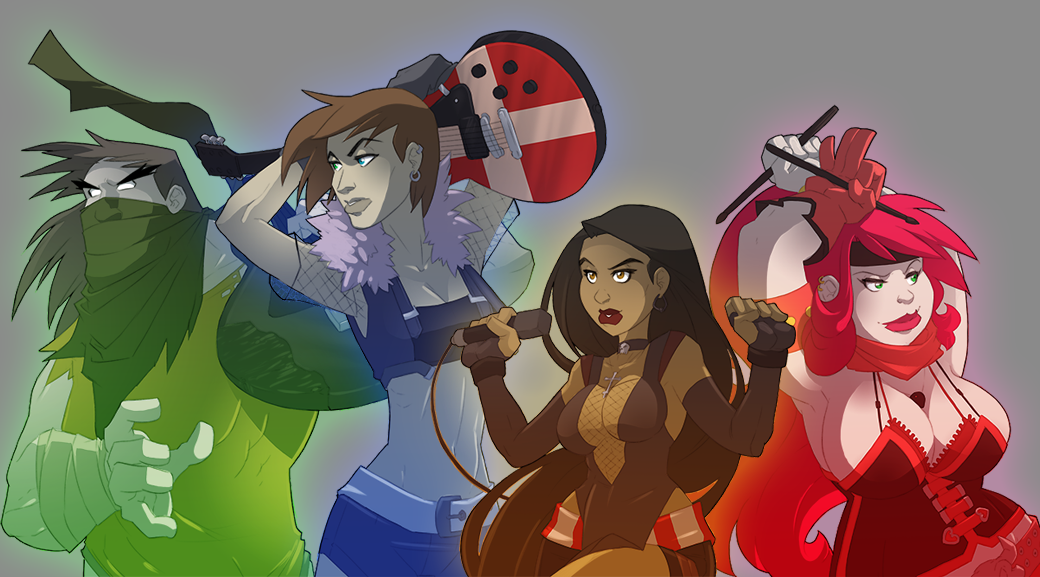 I'm a big fan of TCGs, both as a gamer and a designer. Naturally, this includes Magic: The Gathering -- my car even sporting a decal of the Green Mana tree in its back window. I'm therefore simultaneously surprised and ashamed with how long it took me to borrow MTG's core mana categorization as a method of sorting what is fast becoming a huge pile of skills available to the characters in Harmonic Odyssey.

Getting things to feel correct in an RPG battle system is hard enough, but getting it right for a visual novel, where story and characterization are key points in gameplay, is even trickier. Pair a character with a skill that doesn't match up with their playstyle or personality, and you risk dislodging the intricacies of the game's overall feel. This color-coded method (blue, red, green, white, and black) simplifies the alignment process and makes picking skills for allies and enemies not unlike building a competitive deck of cards. Here is a small sampling of this methodology at work on my main cast, as well as a sneak peek of what gameplay will feel like with each one of them: 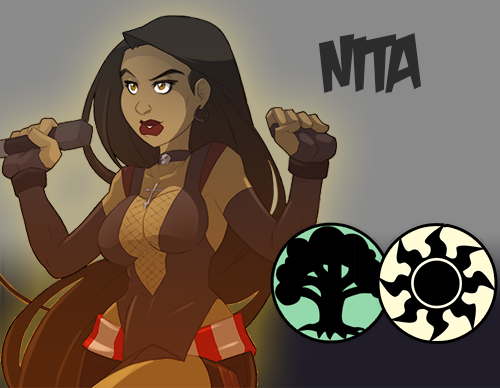 Nita: Green/White
Of all my characters, it was my main for whom I had the most trouble identifying central mechanics. In fact, I had long finished large portions of the other girls' skillsets long before I even touched Nita's actions. This turned out to be a wise move, allowing me to identify missing tactics in both the early and middle portions of the game. What I did know is that I wanted the character to start out rather plain, but achieve massive, heavy-hitting blows by game's end. The green mana aspects, therefore, were easy to put in place and still remain. These are reliable, solid attacks that just plain dealt their fair share of damage. The white mana portions came as an afterthought when their absence became too much to ignore -- strong buffs that aid Nita as well as her team.

The ultimate cheerleader, Nita's skillset features a move she has right out of the gate called Sound Barrier. This buff provides a protective shield which absorbs hits until broken, mitigating the destructive power of heavy hitters and allowing herself or a teammate some security while setting up combos. She's not as quick to gain TP as her bandmates, but her Falsetto is a relatively strong single attack that can take out annoying monsters that otherwise will not die. Her Voice skills are relatively easy to master and if timed correctly, will pack a wallop. 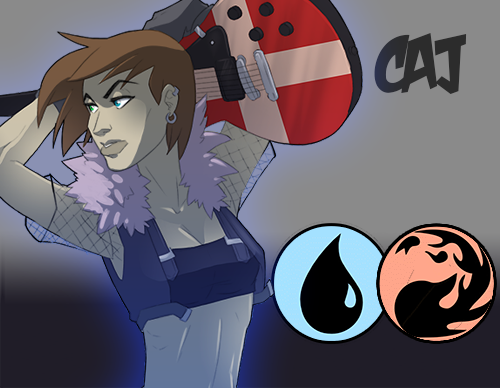 Caj: Red/Blue
Caj's offense tactics can be summed up as all aggro, all the time. Her natural proclivity towards speed over strength makes her a natural fit for classic rogue mechanics, while her equipment features a whopping four upgrade slots (the most of any band member) which provide a good amount of versatility. Caj's skillset rewards you for fighting, and though she is physically weaker than the others, she makes up for it with the highest dodge and counter potential of the team. Too, she has a few stealth abilities which will aid in taking the guesswork out of evasion. Still, watching her health bar is absolutely essential.

The Bleeding debuff is featured throughout a variety of Caj's attacks, leaving your opponent with an injury that wont mend itself for five turns and will take a substantial amount of HP until it does. Caj's Gouge special costs the least amount of TP, hits twice, and makes an enemy bleed. Too, it stacks -- so if you choose to forego gouging your opponent and instead manage to max out your TP bar, you will be able to use Double Gouge, which hits four times and also bleeds the target for additional damage. A master guitarist, Caj's Guitar skillset is the hardest to time, but it hits a single target for massive damage when you do manage to keep up with her. 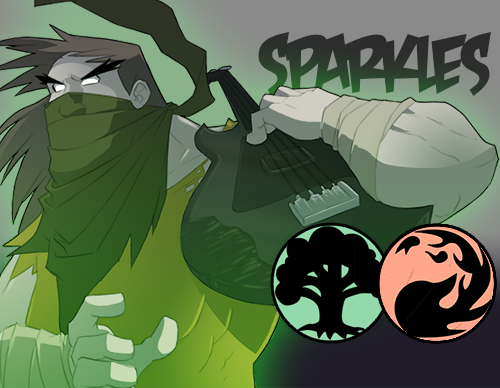 Sparkles: Green/Red
Say what you will about Sparkles' bass playing skills, she knows how to smash faces like no other. Her moves are ridiculously overpowered, and she's a prime candidate for scoring Overkill bonuses on enemies for this reason. With the highest defense and the strongest basic attacks, Sparkles can be counted on as band tank, capable of pulling the bad guys away from weaker characters and giving them a taste of their own medicine, besides. It's worth noting that she's the slowest of the bunch, and has the highest potential to do things you don't expect, so count on a little chaos when putting Sparkles at the center of your battle strategy. Still, she boasts the highest HP of the crew, and manages to self-heal the fastest, recovering a portion of her health bar at the end of every turn.

A fun skill at her immediate disposal is El Kabong, which is your basic hit-the-bad-guy-with-your-bass attack that is found in every heavy metal RPG. Her special is Chugga Chugga, which runs over an enemy with the force of a locomotive and simultaneously stuns them for a time. As was previously stated, Sparkles isn't the best bassist in the world, but she can still carry a beat. Her Bass skills are significantly easier than Caj's Guitar mini-games, offering fewer, but stronger, timed hits, and a greater chance to land them all. 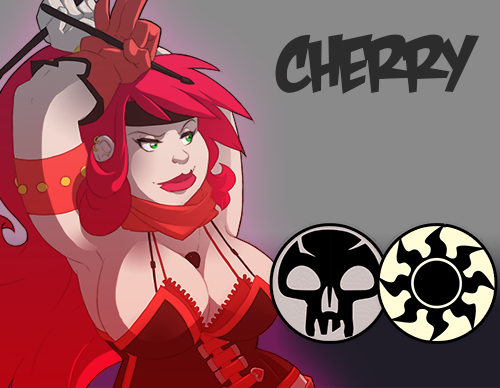 Cherry: Black/White (and sometimes... Rainbow!)
Cherry is a very interesting support character. She's a healer whose remedies are one part cure, one part catastrophe, choosing to use adult beverages and other... substances... as buffs. Too, she functions as a formidable debuffer, doling out DOTs to her enemies and strong AOE attacks in equal measure. To that end, her skills as a whole aren't the hardest hitting, immediately, but they quickly stack up and allow her to gain the upper-hand in the late game. It's rumored that Cherry even has some top-secret Metronome-esque Wildcard maneuvers in the works, so you, and your enemies, and your teammates, never know what they're going to get! Cherry has the highest MP of the bunch and recovers these points at the end of every turn, so she's rarely out of tricks to pull out of her (nonexistent) sleeves.

Along with a basic but crucial heal ability, you'll get a move called Sonic Sensation at the start of the game, which is an AOE attack that focuses on two enemies, simultaneously, and can really help out in terms of crowd control. Cherry gains TP quickly, and her special, Solo, does a fair amount of damage to an enemy while simultaneously healing your entire party, recovering a large percentage of their health bars. Cherry's occupation is syncopation, and while she's no Ringo Starr, her Drum skillset has a high damage potential for multiple enemies, if timed correctly. These mini-games generally move faster than Nita's, but if you land one at the center, you'll definitely reap the rewards.

And that's all for now, gang. Next up, we hope to have full character profiles and a more detailed moves list for each one. Stay tuned!