As promised in our last devlog, here are snapshots of our four heroines, the ladies of Baen-Shee -- their pertinent details, personalities, and skill attack screen shots. Those of you who have been familiar with these characters for some time now will likely be surprised by more than a few significant changes... Or perhaps you'll be more interested to see just how much hasn't changed... 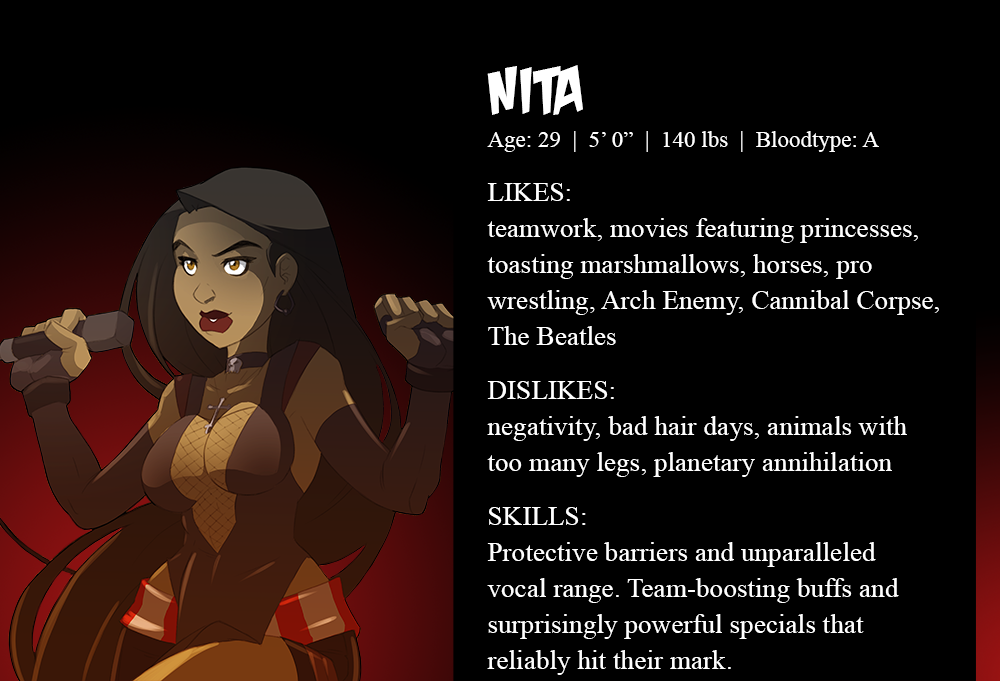 In-Game Bio Excerpt:  Unlike her bandmates, Nita Nirvana’s life path as a former pop star kept her mostly on the straight and narrow. Despite outward appearances, though, the petite songbird has a fiery personality and unmatched tenacity that one would be unwise to dismiss.

Vocalist supreme and leader of the group, Nita acts as main protagonist of the game and the character most under the player's sway. She is constantly trying to find common ground amongst her other opinionated and persuasive bandmates, and is often tasked with keeping them safe from themselves. Nita is otherwise quite laid back and avoids confrontation, though her optimistic nature can come off a bit naïve. Take care in trusting others when it's time to make important decisions (and remember that all decisions have the potential to be important). 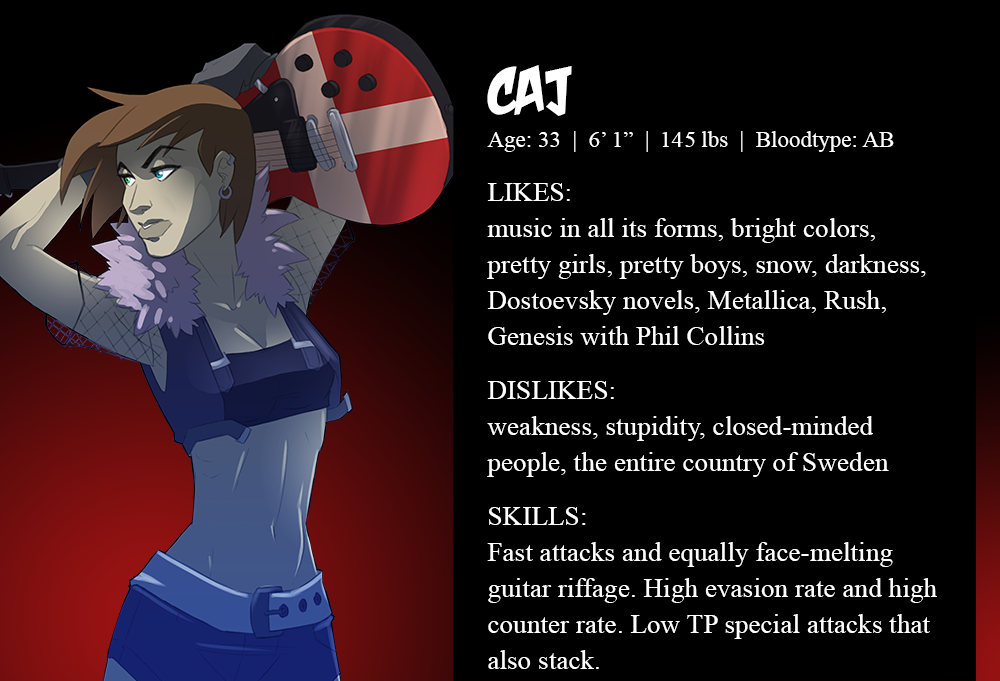 In-Game Bio Excerpt: Caj Stryker boasted the reputation of musical powerhouse long before joining Baen-Shee as its nimble-handed guitarist. Though rumor persists her on-stage prowess is an elaborate front for her past as a cold-blooded assassin.

A true virtuoso, Caj is one of the world's greatest guitarists and an all-around musical genius, though one can't shake the feeling that she's hiding a few skeletons in her closet. It is perhaps for this reason that she comes off as a hard egg to crack and more than a bit aloof. Throughout the game, Caj will be one of Nita's fiercest allies (having a not-so-subtle crush on her vocalist, besides), and someone who can be counted on to pull the group out of danger. Unfortunately, she tends to be significantly braver than the rest of her bandmates, and her confidence in battle may end up putting our heroines at great risk for what may or may not be great reward. 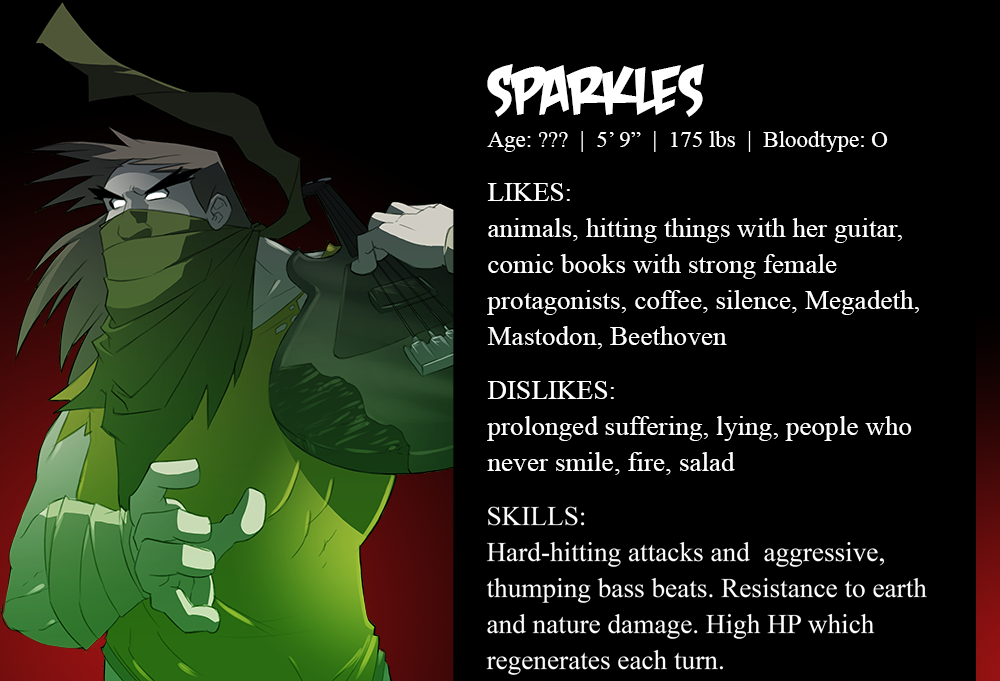 In-Game Bio Excerpt: Sparkles, the Bass Player, acts as the group’s heavy. This beastly mystery woman is short on words, big on action, and as talented at finding the natural rhythm of things as she is deadly.

"Speak softly but carry a big bass" could be Sparkles' motto. Quiet as a mouse, this woman of mystery mostly keeps to herself, but you won't exactly be able to ignore her, should she ever decide to make her opinion on something known. Throughout gameplay, Sparkles will let her actions speak louder than words, and you may find yourself (reluctantly or not) following her lead more than once. She is surprisingly insightful, however, and if you pay attention to her reactions, few and far between as they are, you may just be rewarded. 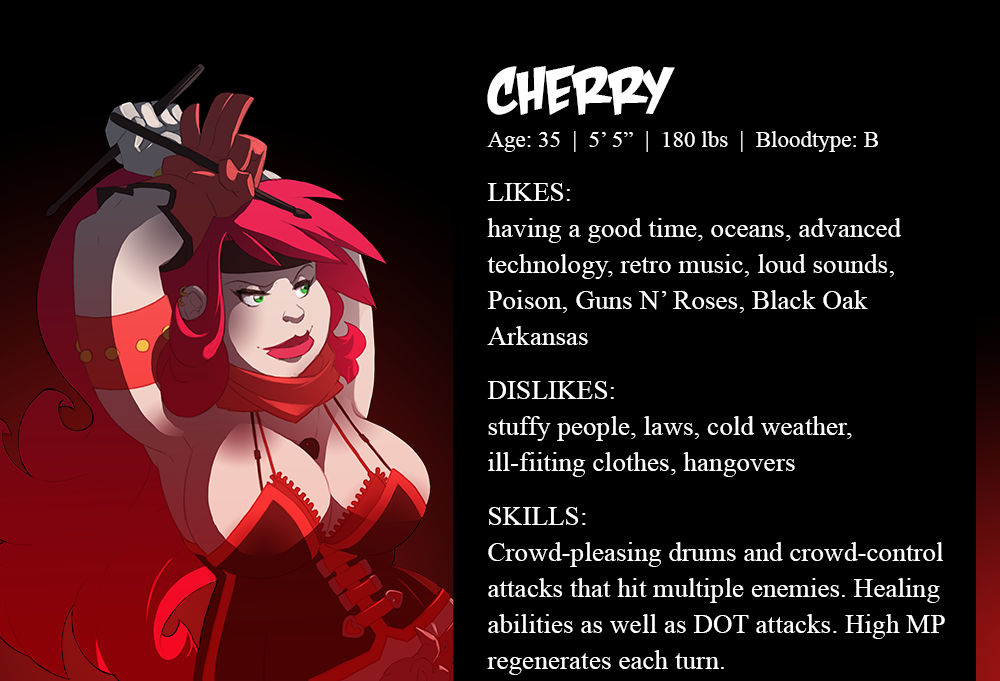 A bit of a loudmouth, but one hell of a drummer, Cherry nevertheless remains more interested in talking the talk than walking the walk. As the team's healer, her skillset is utterly essential, though she often comes across as looking out for number one -- and you'll have to be sure she's not overpowered during combat. Don't confuse her self-centered nature as self-serving, though. Cherry is all about preservation, and the things that drive her through the game will be most likely to keep her head (and those of her bandmates) firmly attached. Just don't let her go overboard when it comes to adult beverages and other illicit "performance enhancers".

That's it for now. Join us next time for more gameplay footage and a new trailer, coming soon!